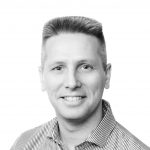 The Finnish engineering industry is becoming electrified. Many manufacturers are adding machines equipped with electrical power lines to their product range. In the building of mobile machinery, the core of the product is no longer a diesel engine and the mechanical or hydraulic force it produces. Now we need new types of experts to harness electric power for profital use.

The replacement of fossil fuels with zero-emission electricity acts as a driving force for all development. At the same time, the energy efficiency of the machines is also improved. New technologies always bring with them opportunities to create added value through the use of new services, autonomy, or more accurate data.

The power of current diesel-powered machines is generated from a continuously rotating axle. From the axle, the power is transferred to the wheels and other actuators either mechanically or hydraulically. In many applications, the efficiency of the mechanical transmission is pretty much the same as that of the electric transmission line, but the energy is wasted when the engine is idling, and the speed of the engine varies as the load changes.

Hydraulic power transmission is almost comparable to electricity, but almost half of the power produced is lost. Hydraulics do not transport energy in its pipes and valves as easily as electricity flows through a copper conductor. The system usually requires a constant pressure, which also means a constant rotation of the hydraulic pump. Whereas hydraulics reach about 45% efficiency, electric power lines reach 95-98%.

While the design of the traditional machine is based on the mechanical transfer of power from the internal combustion engine to the wheels or hydraulics, now the same power is transferred electronically along pliable wires. The power generating motor can be placed as close as possible to where the power is required.

Every moving part is worn out over time requiring regular maintenance as well as creating a risk of sudden breakdown. Mechanical drivetrain is based on the transmission of movement, so the electrical drivetrain significantly reduces maintenance costs and improves reliability.

The electric power line transforms the entire machine structure to be more efficient. When the power source is located where the power is needed, there are fewer losses caused by transfer. The electrically powered machine can then also be optimally designed for the task it is intended to do and power sources and motors can be added after that.

The new era of engineers

The good news is that electrification technology is already here and ready for everyday professional use. At the same time, it will require a change in practices from the industry manufacturers. The manufacturers of internal combustion engines need to change to keep up with the changing markets and electrification.

The manufacturers of electric motors and inverters are taking on a significant role by delivering their products for use in the electrification of machines both under their own brands and as branded to their customers. However, very few internal combustion engine manufacturers intend to become electric motor manufacturers, so the relationships between companies are changing a lot.

At the same time, however, as new electrified machines begin to enter the market, the era of internal combustion engines is not ending yet. If the charging infrastructure cannot be reasonably implemented where it is needed, or if the charging time is not proportionate to the operation time, there is still use for the combustion engine. For some machinery manufacturers, both options remain in use, making modular design even more important in terms of the power source.